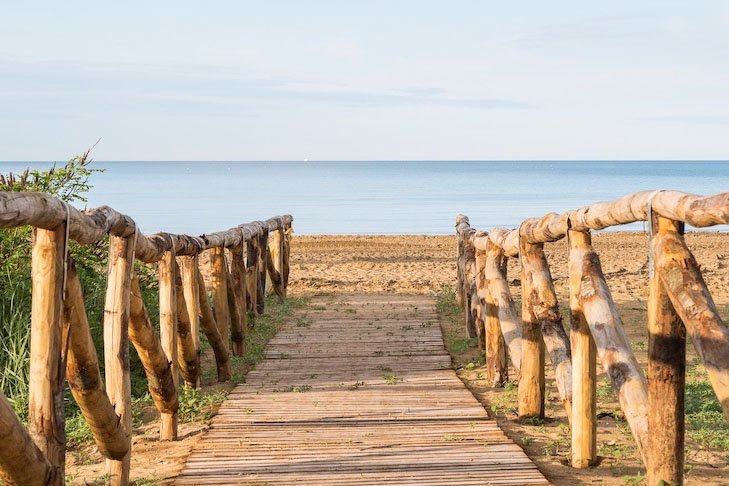 Located nearby the town of Agde, Cap d’Agde Village Naturiste is a world-famous swinging and naturist resort and it is practically a city on its own. With its own many shops, restaurants, bars and nightclubs, it attracts many visitors of all ages, colors and from all over the world.

In Cap, nudity is legal and common (even in cafés and grocery stores), so one is advised to be prepared for some unusual sights.

We decided to give it a go and see it all for ourselves. I mean, how much nudity is too much nudity?

Cap resort is a truly unique place, not only because you cannot but see naked people anywhere you go, any time of the day, but also because there is a specific kind of dynamic going on there. As keen observers of such stuff, we were very curious to capture this and did not leave disappointed. Although, to tell the truth, it’s not like the place was really meeting our expectations. One of the highlights of our visit was definitely the beach. Apart from having one of the largest seaside resorts in France, Cap d’Agde features one of the best-known nudist beaches in Europe. During the day, this is the highlight of the resort life.

During high season, the beach can be very packed, so prepare to have almost no privacy. Although, privacy is probably not something you are after when you go to Cap d’Agde.

But – sex on the beach is strictly forbidden. However, this rule is not strictly adhered to. And if you are willing to take the risk, sex will – rest assured – not go unnoticed by other visitors, especially those who spend their days there literally waiting for you to get busy (read: single men). The speed at which dozens of them can gather around the site of “action” is outright remarkable and a phenomenon in its own right (and super fun to observe!). You don’t have to take your girl doggy to make yourself noticed – a hand-job is more than enough. The men won’t disturb but don’t expect to walk into the dunes without getting (at least) a couple of dedicated followers. Actually, don’t walk into the dunes unless you don’t have to. It smells of pee. Plus, it’s not actually allowed as it is considered a protected area.

Importantly, sex is especially frowned upon by the hard-line naturists who like being naked around others but are very much against public sex. Naturist beaches and parks have long been a turf of sorts between these folks and those who enjoy “doing it” in front of an audience.

But the beach itself is truly lovely! It’s easy to access, conveniently close to the village and comfortably long so you can choose more or less crowded areas.

If you are a camping lover, there is a campsite just meters away, behind the dunes. The beach has also a couple of bars and restaurants and numerous mobile vendors selling ice-cream, drinks and snacks.

If not too hot, the sand is wonderful to walk on (just watch for broken shells!). On the downside, there are not many showers and toilets on the beach itself (which partly explains the dunes smell). Once people start going back to the resort and the sun goes down together with the temperature, a somewhat different mood sets in. Numerous restaurants and bars start filling up and the atmosphere becomes very cosy and inviting.

In the evenings, people tend to also wear more clothes, which does make dining less weird.

Revealing, sexy, fetish and often creative outfits are common, but so are regular clothes and, in a way, nothing really stands out. Cap resort can be quite pleasant at this time of the day.

If you feel playful, there are many clubs and spas open throughout the day, but also well into the night. Private parties in some of the many private apartments in the resort are popular and networking can pay off. And, if you feel like having a small break, do visit one of the nearby towns, some are well worth it, like the nearby Agde, Béziers (half an hour) or if you want to go a bit further – Montpeiller.

Once in a while, we all need a break from too much nudity.

Doing it the French way

After an hour or so drive from Vence, via Antibes and Cannes, we finally arrived in...